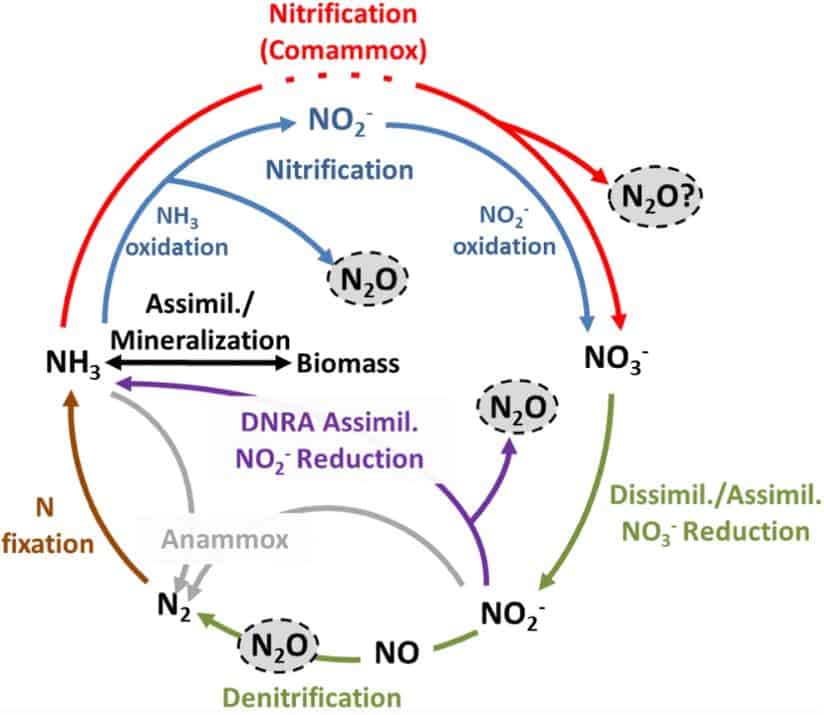 Since biofilms exhibit complex substrate gradients and microbial stratification, it very difficult to predict their behavior.

For the nitrifying biofilm, the model included nitrous oxide formation by ammonia-oxidizing bacteria (AOB) via the hydroxylamine (NH2OH) and the nitrifier denitrification pathways.

Nitrous oxide emissions from AOB biofilms of different thicknesses were explored as a function of bulk dissolved oxygen. The results suggested that nitrous oxide emissions from thicker nitrifying biofilms were greater than those from suspended-growth systems. The main cause is the diffusion of NH2OH, an AOB nitrification intermediate, from the outer, aerobic regions of biofilm to the inner, anoxic regions. The presence of nitrite-oxidizing bacteria (NOB) also enhanced N2O emissions. This was due to an increased dissolved oxygen gradient in the biofilm.

The denitrifying biofilm model included nitrous oxide formation by heterotrophs via conventional denitrification pathway. The denitrifying model showed that, in presence of excess of electron donor, denitrifying biofilms have two distinct layers of activity: an outer layer with net production of nitrite (NO2-) and N2O, and an inner layer with a netconsumption. The biofilm thickness affects N2O emissions, and rates are influenced by the electron availability within the biofilm.

The presence of dissolved oxygen in the bulk led to a spike of nitrous oxide formation in the outer biofilm, due to diffusion of NO2- from the innerbiofilm and its high affinity for reduced electron carriers relative to the other nitrogen oxides in the denitrification pathway. The model results were compared to those of an experimental system. In addition, a model of N2O emissions in a denitrifying filter was developed and used to explore emissions in a biofilm reactor.

This research provided insights into the mechanisms of N2O production and consumption in biofilms under a variety of conditions relevant to wastewater treatment. The results suggest that N2O formation in biofilms is complex, and often distinct from suspended growth systems.

If you would like to have more information about my  Ph.D. and current research you can check my blog or you can take a look at my publications page.

This site or the tools of particular parts integrated in it process personal data (e.g. browsing data or IP addresses) and make use of cookies or other identifiers necessary for the operation and for the achievement of the specific purposes in the Privacy and Cookie Policy. You declare to accept the use of cookies or other identifiers by closing or hiding this information, continuing to browse this page, clicking a link or button or continuing to browse in any other way.